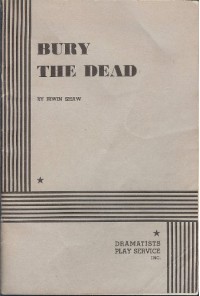 A proto-dramatist work that's parts Catch 22 and parts The Things They Carried, Irwin Shaw's Bury the Dead is a one act play that explains what happens when six soldiers refused to be buried, on the grounds that the rational for their deaths is insufficient for their permanent internment so they will stay unburied until they finish their purpose.

A minimalist setup is good for creating some brief, stark images. The idea is a brilliant foundation of potential to question philosophy, mortality and everything in between. While Shaw often gets a little too heavy handed and didactic, especially with the generals' interludes, there are moments in the play that speak strongly to the incomprehensible nature of death and dying for causes not personally held by those who suffered for it. At the very least, playwrights might want to keep this as historical context of an anti-war play that speaks to the times between the world wars.